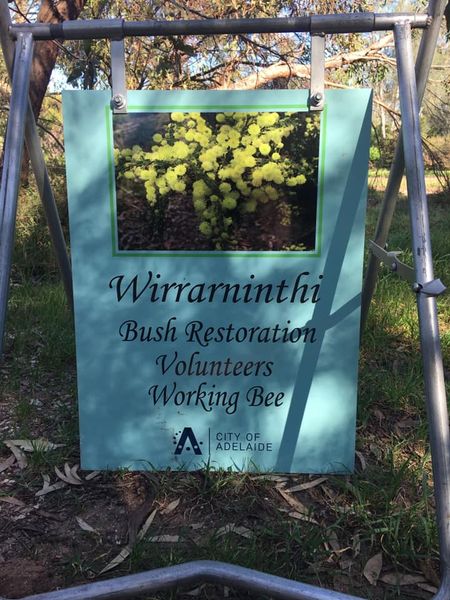 Interested Adelaide Rotary Club members have formed the Wirraninthi group which meets in the West Parklands on the 1st Saturday of the month near the West Terrace Catholic Cemetery to help restore the area to its natural state.

Wirrarninthi/Park 23 is part of the parklands which Colonel William Light placed around the City of Adelaide in his plan of 1837. It is bordered by West Terrace on its east side, Sir Donald Bradman Drive (previously Hilton Road) to the north, Anzac Highway (previously Bay Road) to the south and railway lines to the west. West Terrace Cemetery has subsumed a large central portion of this park, with only a small section surviving on the cemetery’s south side.

Originally the Wirranendi Bush Restoration Project was started in 1994 in Park 23 of the West Parklands just south of Sir Donald Bradman Drive. The name name “Wirranendi” has become “Wirrarninthi” which is the Kaurna name for the area and means “to become wirra” or “to become transformed into a green, forested area”.

The fundamental aim of the project is to revegetate this area of the Parklands to return it to its original habitat of Mallee Box Woodland. In particular the aim is to protect remnant vegetation, foster the growth of indigenous flora in the area at the expense of exotic flora and to encourage indigenous fauna to use the habitat.

The “Friends of Wirranendi” started to work in the area at that time, but eventually after plantings were done development ceased. In 1997 a Kaurna trail was created where food, medicinal and craft plants were encouraged. There are remnants of this still present in the area.

In 2004 the group was revived and work began again. It was at this time that the Environment Committee of the Rotary Club of Adelaide, under the leadership of Mervyn Chappel, decided to take an interest in the project. Tasks involve removal of introduced, exotic weed growth and the reintroduction of native plants and protected indigenous flora. Over this time work has been led by Senior Council Ranger Peter Baldacchino and the Environment Committee members have been fully involved since then.

The on-going project has involved members of the committee (and some partners) attending monthly working bees in the park. Members are involved with the whole cycle of plant maintenance from collecting seeds, germination and then planting the young seedlings, followed by much weeding of unwanted varieties while the young plants develop. Water from the local creek has been used to give some of the young plants a fair start in life. Staking, protection guards and mulching are important in the whole process. Those who have been involved with the project from the start have noticed positive changes to the flora in the area and get pleasure from the overall development.

Some attractive and symbolic rock art has been created and is now placed along the walking trail running through the park where biodiversity values are promoted. There is a theme to the trail based around the concepts of Fire, Wind, Water and Earth. What remains of the Kaurna food and medicinal trail is along a gravelly track in the “Earth” concept area – where clearly, as one example, saltbush is thriving.

Work has also occurred on the small wetland in the western section of the park. Weeding and revegetation has restored the wetland into a natural state resulting in the return of water birds and frogs to the park.

In recent times bird, bat and possum boxes have been installed on some tree trunks with a view to encouraging native fauna to use the area. Small rock piles have been incorporated to provide habitats for crawling species. 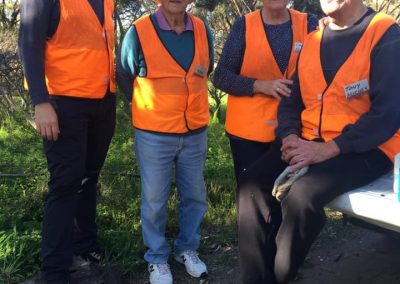 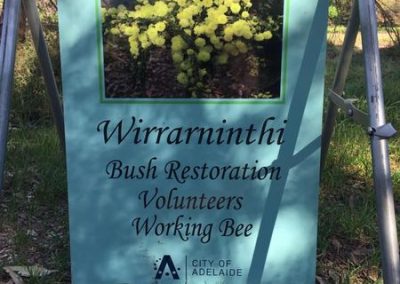 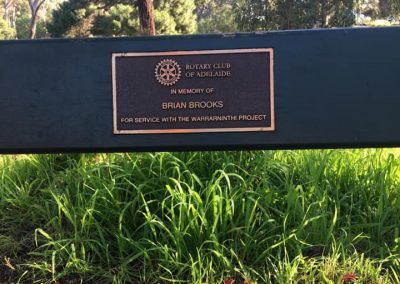