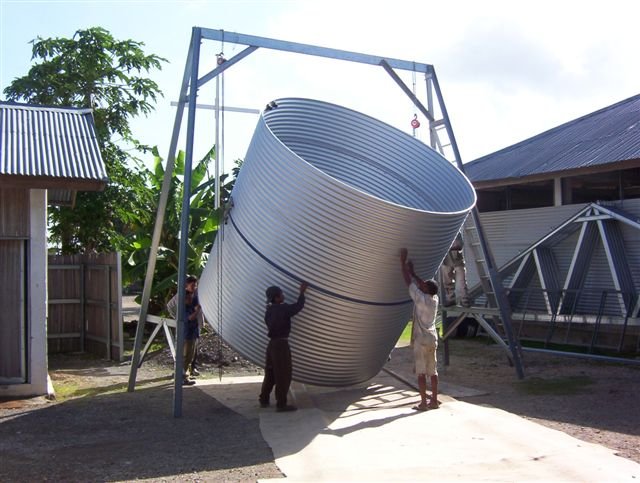 What started as just another Rotary project in the year 2000 to manufacture and install corrugated roofs for homes after the Indonesians retreated from East Timor, has become an amazing success story. The East Timor Roofing Project (ETR) has raised enough money to build roofs on many schools, orphanages, community and commercial buildings and homes for East Timorese, over 3,000 water tanks and in excess of 1,000 grain silos, provide training for local East Timorese trainers, who themselves have trained over 250 East Timorese in building and administration skills.

The installation of the Grain silos has reduced food waste which in trun has had an effect reducing greenhouse gas emissions.

Over 1,250 tonnes of steel has been used to make the roofing and associated products. Equally amazing, the highly successful project has now been handed over to the Timor Leste organisation, Dom Bosco.

Responding to the destruction of over 75% of buildings in Timor Leste, following its vote for independence in 1999, the Rotary Clubs of Doncaster, 9810, Melbourne, 9800, and Lilydale, 9810, set up a factory to produce corrugated steel roofing, water tanks and seed silos in Baucau, the second city of Timor Leste. The aim was to provide humanitarian aid with safe shelter, improve living conditions, rehabilitate the resistance fighters and help start an economy. The earlier projects were financed by Australian Rotary Clubs. Later it became a financially viable enterprise with contracts from government and private business. All profits were used for the benefit of the East Timorese people. Roofing was provided for over 50 schools, many community houses, orphanages, hospitals and clinics. Over 3,000 water tanks made it possible for young village girls to attend school instead of fetching daily household water needs. Water supplies and toilets for schools were a great help to hygiene. 1,000 silos enabled safe storage of seeds for the next year’s crop for many of the subsistence farmers. A centre adjacent to the factory, built with a generous grant from the Shell Sustainable Communities Foundation, trained over 250 East Timorese to a C4 level of basic building skills. A management committee in Melbourne oversaw the project for a full 18 years until its ownership was transferred to the Dom Bosco Order of Salesians, who ran a senior technical college in Baucau and who were capable of administering the project. They are continuing the humanitarian work and training. The factory is now titled Timor Roofing to conform to regulations. 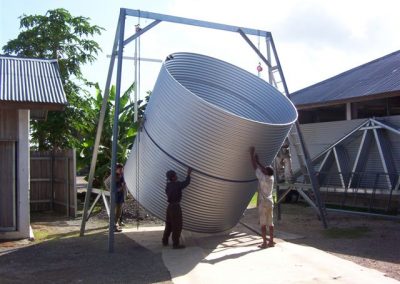 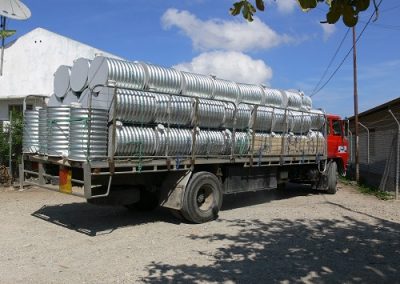